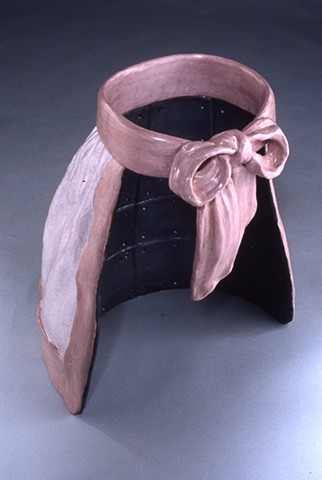 This apron was the first in the series to "come off" the sewing dummies...literally. My grandmother had nine children, she always wore an apron when in the kitchen... my mother never did, I think she rebelled against being in the kitchen so much and just wiped her hands on her jeans. I came to aprons circuitously by finding them at garage sales, lovingly embroidered and sewn by hand by so many women... so many generations of domestic laborors... They not only held a beautiful place in my memory, they became for me a symbol of "Feminine Armor". I reclaimed so many aprons and put them to good use both in the studio and in my own kitchen... The symbol is rife with duality and was a fertile ground for me to explore for a long time.